When I booked my travel via http://www.PulseTours.com, I looked over all the elements that would be included in my stay with them.  Ayahuasca of course, that was what I was there for… Lunches and Dinners, transportation, accommodations, excursions, all pretty standard.  The San Pedro was listed, cool, I already told you about that.  Floral Baths, now things are getting a bit more interesting. And…Frog Venom Ceremony???  I have to say this caught my eye a bit.

Kambo is a secretion from the bright green giant monkey frog that lives in the northwest area of the Amazon rain forest. Indigenous tribes have used it as a prophylactic against malaria, and also to boost strength and stamina. The frogs aren’t injured from the collection of their secretions, which are obtained via scraping onto wooden “Kambo sticks”.

Alrighty then… So, I’d wake up in the morning, have some fruit, then would have my arm burned a bit by a really hot stick and then poison frog secretion paste rubbed into it which was sure to cause immediate fever, increased heart rate, sweating, possible vomiting and or stomach cramps… why not?  Still better than being at a desk selling media!

They also mentioned that it was a powerful anti-inflammatory and helped with both chronic pain (check- shoulders, back, knees) as well as respiratory ailments (check- asthma).  I was very curious to see what it’d do for me!

So after breakfast we all gathered in the maloka for our Kambo ceremony.  You could opt for one or two doses when you got up there.  I should mention that before you go up, you have to drink this bowl of fermented yucca liquid, that was kinda warm and chunky, tasted like crap, and was made from people chewing the yucca and then spitting it into a jug and letting it sit a while.  I don’t recall the proper name for it, but apparently they love it down there- to us it was like rotten oatmeal or Hot Yogurt (the inspiration for our band name later on).  We were to drink this so in the event we that did become sick, we’d have something to purge rather than a bunch of potentially painful dry heaves…

After you receive your Kambo, you go back to your mat while it takes effect.  I was told it would come on immediately and pretty strong, and would peak in about 5 minutes after which time the effects would then start to fade.  If you were feeling sick or ‘wanted out’ they’d administer the very ancient ‘antidote’ of dumping cold water on your head… always does the trick.

I’m second to last to go so I got to see everyone’s reactions.  Some did puke.  Some got super overheated and tapped out early.  I was determined to ride it out no matter how bad it got.

My turn-  I’m given my bowl (so much!) and choke it down, then head up to the shaman for my Kambo.  I’m pumped!  I feel like a warrior about to go on a hunt!  I’m gonna have Frog Venom scars…fuck yeah!  It feels like 2 cigarette burns are administered  and then the paste is applied.  As I’m headed back to my mat I feel it start to hit.  Yep, this is some pretty strong shit.  My body temp is climbing, I’m sweating, but it feels awesome.  In my mind I’m singing some of our warrior chants from my Mankind Project weekend and letting the wave of the medicine wash over me.  Dolan asked how I was doing, and I said I got this.  Unfortunately I didn’t puke and that vile liquid was actually taken in by my body, but I rode the wave and as it started to wear off I received my cold water to get my temp back down to normal levels.

Again I have to pause to think about where I’m at and what I’m doing.  It’s Sunday morning and most of my friends back home would be headed to brunch or to watch football games, and I just had frog venom burned into my arm.  So weird.  So awesome.  I love what I’m doing.  All I have left is the main event, the Ayahuasca.

Post Kambo note- I don’t know if it’s placebo or not, but my asthma felt a lot better after the ceremony!  I wasn’t short of breath when working out, my allergies weren’t acting up (and I was in tree/pollen central), and even now a few weeks later things are still cool!  My scabs finally came off though I’m hoping the scars stick around forever.. 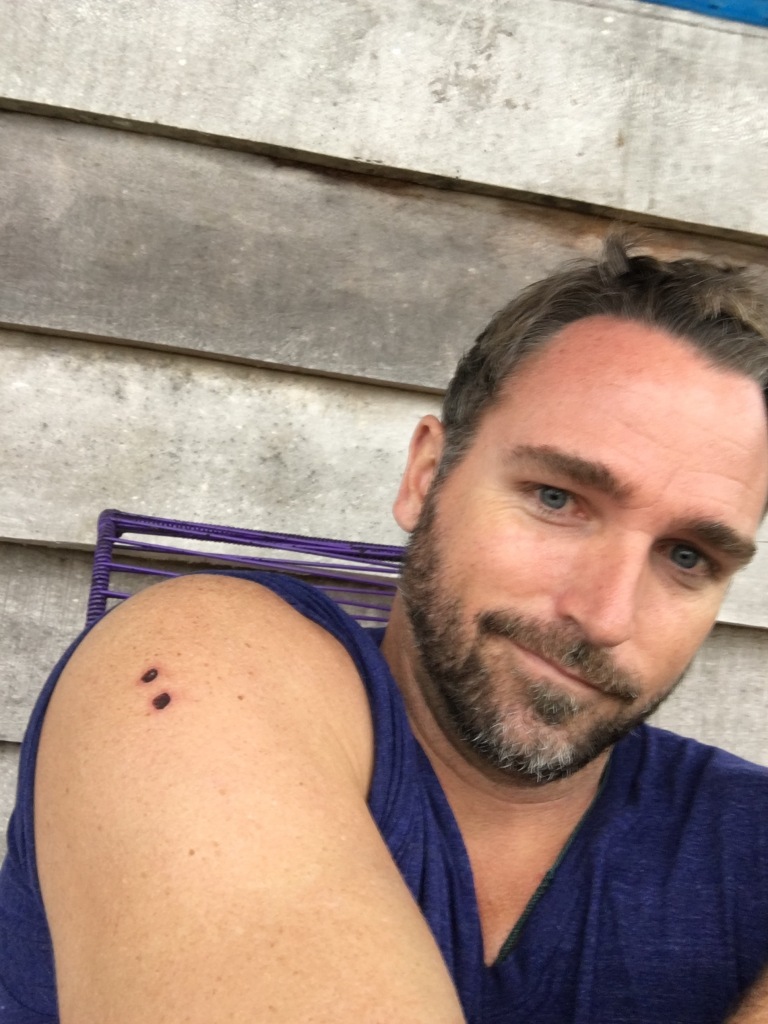 Will keep this updated with a rotation of favorite quotes:

“Train yourself to let go of everything you fear to lose...”
- Yoda, Star Wars Episode 3, Revenge of the Sith”